Your Penis Grows Using the Process of Cell Division

You are here:
February 3, 2015Leave a commentPE NewsBy Big D

How Exactly Does Your Penis Grow?…
Cell Division of Course!

So how are new cells formed? 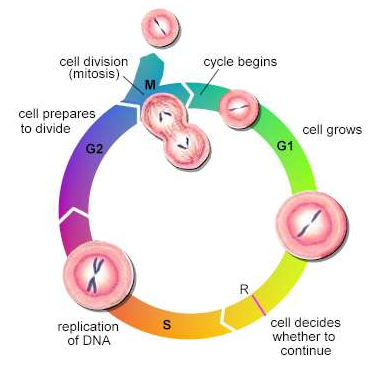 The cell is a basic structural and functional unit of all living things, ranging from tiny bacteria to whale dicks and even humans. All cells must divide to reproduce. For single-celled organisms, cell replication is necessary for reproduction. For multi-cellular organisms, cell replication is necessary for growth, reproduction and for maintaining the body by replacing dying cells.

In large, complex organisms, such as mammals, cells divide and die in a cycle that keeps the tissues of the organism rejuvenated. The process is called the cell division and the complete cycle of cell division is called a cell cycle.

New cells are formed when pre-existing cells divide or replicate. Cell division is the process through which cells replicate, either to produce daughter cells for bodily growth, tissue repair and asexual reproduction (this is called mitosis), or for sexual reproduction (which is referred to as meiosis).

Definition of cell division: Cell division is a process in which one mature parent cell divides into two or more genetically identical daughter cells.

In other words, cell division is the process in which a single cell gives rise to two or more cells. This process involves the sharing of genetic material (DNA).

Why Cell Division is Important for Penis Growth

In multi-celled organisms (such as humans) cell division is absolutely critical. This refers to the process by which the cells, the building blocks of the organism, replicate themselves. Almost every of our body part, tissue or cell needs to grow and hence is dependent on cell division for growth, reproduction, regeneration, increase in size, mass and number. Cell division is also used to replace old cells that have died, repair damage when an organism is wounded and ensure that tissues grow to their proper size as the multi-celled organism is maturing.

Mitosis: Mitosis is the most common and typical cell division, as it takes place constantly in every tissue of the body. It provides cells for growth, cell replacement and is asexual reproduction.

Mitosis is quite simple and the newly formed daughter cells are capable of reproducing new cells. Mitosis results in one cell developing into two new cells, each with a separate nucleus and new set of chromosomes. The genetic composition of the parent and the daughter cells remains the same.

Meiosis: Meiosis is only used for sexual reproduction e.g. in human reproduction. Meiosis is a complex process during which the chromosome number or the genetic material is reduced to half in the daughter cells. The daughter cells formed after meiosis can only reproduce new cells by combining with another cell.

Cell division is stimulated by certain kinds of chemical compounds. Molecules called cytokines are secreted by some cells to stimulate others to begin cell division. Also, contact with adjacent cells can control cell division.

Like almost any other body part, organ or gland, the human penis is composed of numerous tissues. Each tissue, in turn, consists of multiple cells performing similar function. These cells, like any other cell, depend on “cell division”. Hence, cell division has a vital role in the development, growth and strength of male reproductive parts including testis and penis.

It is thought that cell division in the penis causes dramatic changes in the whole organ. As a result, the vascular vessels, urethra, corpus cavernosum and spongiosum, cutaneous cover, muscle and fasciae are all subjected to proliferation. Because this proliferation takes place throughout the penis, it increases both the length and girth of the penis.

Mitosis occurs when cells within the existing penis tissue begin to divide, known as cellular division, where one cell divides into two. In the simplest sense, the nucleus of a cell divides within itself then splits in two, each containing a mirror image of the original nucleus. The splitting of the two cells once the nucleus has divided is called cytokinesis, the final stages of cell division and tissue growth.

The cells will rapidly divide and will create new tissue for a longer and larger penis.